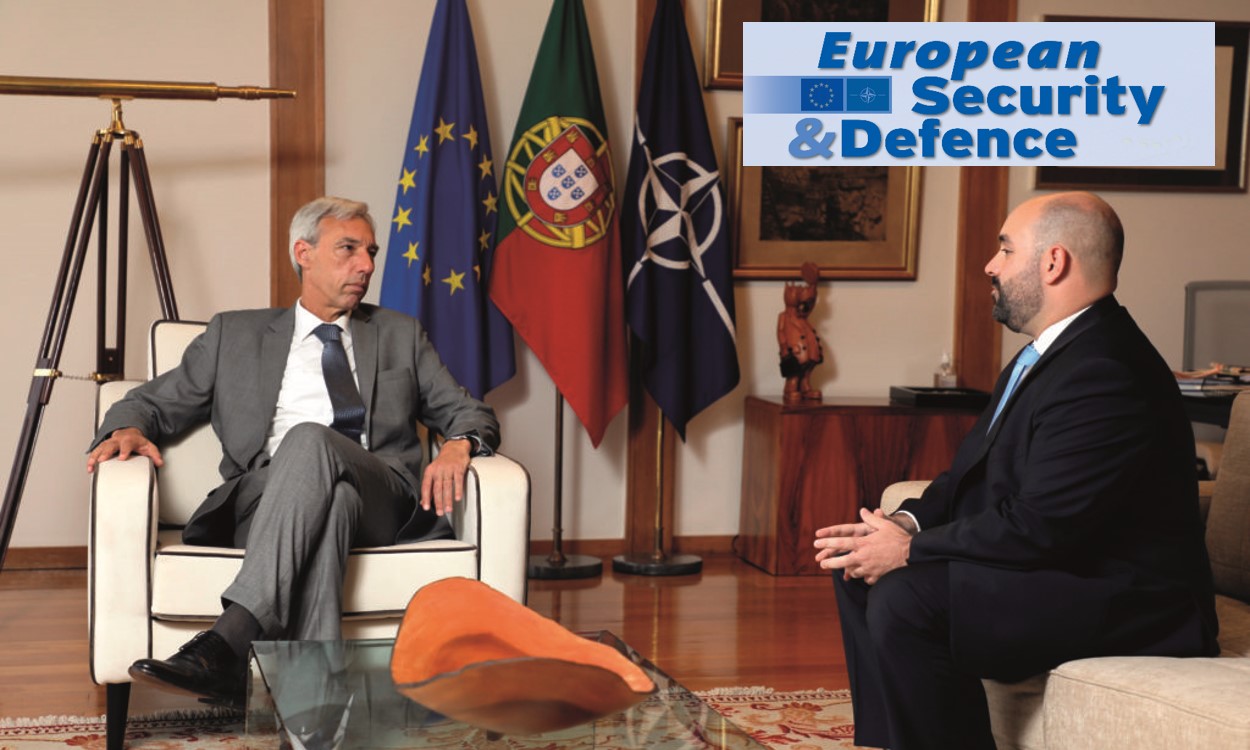 ESD: How has the Covid-19 influenced the operations of the Portuguese military? Are there examples for increased CIMIC patterns?
Minister Cravinho: The Portuguese Armed Forces have been deployed in response to Covid-19 in a number of ways, providing crucial support to the civil authorities in terms of planning, making available military healthcare facilities and products (hospital and military pharmaceutical laboratory), as well as CBRN capabilities that have been used in disinfecting key facilities (such as care homes and schools). They have also been engaged in information campaigns of best practice in public institutions (visiting over 500 schools), making an important contribution to a safe return to a degree of normality. Existing protocols for civil–military cooperation have provided an adequate framework, and we are looking into ways to incorporate lessons learned into our procedures. Portugal had a pioneering role in promoting among Allied countries in the EU and NATO the systematic and regular sharing of lessons learned by the military as a way to anticipate problems and solutions in fighting Covid-19. The sharing of lessons learned from Covid-19, regarding civil–military cooperation, will be one of the priorities of the upcoming Portuguese EU Presidency, in the first semester of 2021.

ESD: How has the refugee migration from the Middle East and Africa affected the Portuguese military?
Minister Cravinho: The Portuguese Ministry of Defence and the Armed Forces have been strongly committed to a humane response to the challenges created by the flow of refugees from Africa and the Middle East, showing active solidarity with other Member States of the EU and NATO. Both the Portuguese Navy and the Air Force have been deployed in EU and NATO missions in the Mediterranean. This has also been the case of the Portuguese Maritime Police, a militarised force under the Ministry of Defence, that has been patrolling the waters around the island of Lesbos and has rescued around 7,000 refugees in the context of Frontex Operation Poseidon since 2014.

ESD: Are you satisfied with the capabilities of the Portuguese Armed Forces, and what needs improvement or modernisation?
Minister Cravinho: I believe no country is fully satisfied with its defence capabilities. I also believe that most in Europe would recognise that after the end of the Cold War we became somewhat complacent, and that investment in this and other areas was severely restricted after the 2011 financial crisis. But we have been reversing those trends. Since 2014 and the so-called Wales commitment, Portugal has increased its investment in defence capabilities by 29 per cent. And existing capabilities, existing modernisation and acquisition programmes, provide the required means, now and moving into the future, to implement Portugal’s vital strategic aims.

ESD: What international deployments are the Portuguese armed forces currently involved in? To what extent are you supporting your former overseas territories in the military arena?
Minister Cravinho: Portugal is currently involved in 14 missions with the UN, NATO, and the EU, in 11 countries, in Africa, Asia and South America. They include a rapid reaction force responsible for the security of Kabul airport in the context of ISAF, and a quick reaction force in MINUSCA in the Central African Republic. We have been able to maintain key operational missions and to sustain our commitment to international peace and security while preserving the healthcare of our troops in this especially demanding context.

Among NATO allies and EU member states there has been agreement regarding the need to continue to closely coordinate our decisions regarding these missions, making sure we keep our troops as safe as possible, but also that we do not abandon partner countries in a time of need. Portugal has a longstanding programme of military cooperation with other Portuguese speaking countries, in Africa, as well as in East Timor, with an annual budget of around €6M. The traditional focus is on education and training, in Portugal and in partner countries, with a significant presence of Portuguese instructors on the ground. But we have been widening and renewing the scope of these very important military cooperation programmes, to include, for instance, cybersecurity, military health or the sharing of lessons learned in fighting the Covid-19 pandemic. Another innovative example of this cooperation is the deployment, since January 2018, of a Portuguese patrol ship in São Tomé, in the Gulf of Guinea, jointly operated by the Portuguese Navy and the local Coast Guard, providing capacity building as well as operational capabilities in maritime security.

ESD: What effects did the establishment of Permanent Structured Cooperation (PESCO) have on Portugal’s defence policy? What developments are yet to be expected in this context?
Minister Cravinho: Portugal is deeply committed to European defence in general and to PESCO in particular. PESCO is a major positive development towards a more coordinated investment in defence across Europe, allowing us to address our needs in defence capabilities. We are full participants in 10 PESCO projects, we are observers in 14 other projects, and we will continue to evaluate future opportunities to participate in more projects. Portugal currently leads 2 PESCO projects: on anti-submarine warfare (MUSA); and the Cyber Academy and Innovation Hub. We believe a collective collaborative effort like PESCO is even more important in a context that is going to be marked, probably, by greater budgetary constraints, due to the economic crisis created by the impact of Covid-19. Portugal is also a strong supporter of the vital role that the EDA plays in promoting a coordinated response to vital strategic gaps and has argued for the need to ensure that the EDF will be adequately funded in the new EU budget.

ESD: What are the lessons learned, and do you plan to return to conscription?
Minister Cravinho: Recruitment and retention are a problem across Europe. But as a result of a recent in-depth independent study of the problem, the Portuguese government has approved a 5-year programme with a set of measures for better recruitment, retention and reintegration in the workplace of the military. We are confident this will significantly improve the situation. These plans do not include going back to conscription. This was a costly system that provided a limited operational output. We do have a system of mandatory attendance by all citizens over 18 years of age of a National Defence Day. It is an important opportunity to make sure that all citizens know the work done by the Armed Forces and are made aware of the opportunities for recruitment, and we will continue to improve it.

ESD: What are Portugal’s current key defence procurement efforts? Which of these are executed in international partnerships?
Minister Cravinho: Portugal has a Military Programming Law, which was revised and approved in June 2019, pre-committing €4.7Bn for a procurement cycle of 12 years. This law guarantees predictability, promotes interoperability and double-use technologies, as well as a strong interface between technological, industrial and scientific systems. This investment package will be used as leverage to attract funding from European programmes. Most of our key projects in terms of acquisition of defence capabilities do have a lead foreign provider, but most also include some industrial facilities in Portugal, or Portuguese-based companies providing key components or future maintenance, and these are our key concerns. Strategic sectors accounting for 37 per cent of the Military Programming Law include: acquisition of strategic transport capacity, acquisition of six state-of-the-art ocean patrol vessels modernisation of our frigates, strengthening of our cyber capacity, and ensuring that our soldiers are equipped with the highest-quality protection, survival and lethality equipment. In terms of international partnerships, we participate in the EU “Space, Surveillance and Tracking” (SST) programme; in the case of C4ISR (Command, Control, Communication, Computers, Intelligence, Surveillance and Reconnaissance) a network of SMEs benefit from participation in consortia and access to European funding, namely PESCO projects ESSOR and ESC2. The Aeronautical cluster is being developed by the acquisition of five Embraer KC-390 military transport planes, with key components built in Portugal, as well as the acquisition of Unmanned Aerial Systems (UAS), and the new Multinational Helicopter Training Centre (MHTC). Finally, the Shipbuilding Cluster will also be developed through an Auxiliary Oiler Replenishment (AOR) ship and an amphibious landing platform/dock (LPD) ship, as well as the six ocean patrol vessels (OPVs).

ESD: What about the deployment of unmanned systems?
Minister Cravinho: The Portuguese Armed Forces have been developing unmanned systems and both the Navy and the Army have initial capacity in this area, for military missions and civil protection. Portugal believes UAS provide a very important, versatile, resilient, and cost-effective way to improve our surveillance capability, crucial in terms of improving situation awareness in Portuguese territory in the European continent and the vast area under its responsibility in the Atlantic. They have also proved their operational worth. The Navy has deployed UAVs from its frigates, and RAVEN UAS are currently in use by the Portuguese quick reaction force in MINUSCA, improving their reconnaissance capacity.

ESD: How do you assess the capabilities of Portugal’s defence industrial base?
Minister Cravinho: The Portuguese Defence Industry is mainly composed of SMEs. These SME companies are very strongly internationalised, exporting more than 80% of their production. They have shown a great ability in engaging with much larger foreign partners, as well as in innovating in key areas: aeronautics and space; naval; textile; information and communication technologies; materials and energy; nanotechnology and moulds. Our aim is to increase innovation by cross-fertilising with areas of disruptive technology, namely cyber defence, robotics, unmanned systems, big data/analytics, artificial intelligence and nanocomposite materials. Essential to this process of renewal is the ongoing restructuring of Empordef, the national holding of Portuguese defence industries, which will manage the participation of the Portuguese State in these companies, in line with these strategic and innovation priorities.

ESD: What about offsets and compensation requirements?
Minister Cravinho: More than the question of the nationality of owners or the home base of companies, we have always valued the role of Portugal in at least part of the production, the provision of key components, maintenance capabilities, and the impact of projects and companies in promoting innovation and jobs in the Portuguese economy. Strong and long-lasting relations of partnership with Portuguese companies and a proven track record of effective delivery are the primary concern.

ESD: Your VASCO DA GAMA and BARTOLOMEU DIAS class frigates have been in military service for almost 30 years. Are there plans for a frigate replacement programme, possibly as a joint effort with Chile (and/or Belgium) that operate the same class of ships?
Minister Cravinho: The Portuguese Navy is carrying out a Mid-life Update Programme for both VASCO DA GAMA and BARTOLOMEU DIAS class frigates under the Military Programming Law. The first studies and operational requirements are being drafted and we expect to have in the near future a clear view of the options to be followed in this regard.

The interview was conducted by António Brás Monteiro.